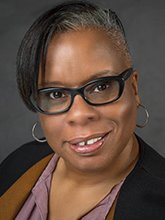 Sheila Cole is a proud Mom, lifetime Prince fan, award-winning Editor, and all around Post-Production Guru, in that order.

Sheila began her creative journey teaching Video Production for the Inglewood School District. It was there that she fell in love with Post Production and passed along her love for editing by challenging her students in editing contests.

From there, she began her 20-year career in television working for some of the biggest names in the entertainment industry, including NBC, Paisley Park, Comedy Central, Warner Brothers, HGTV, Universal Pictures, Food Network, and HartBeat Productions, to name a few.

Sheila was also employed at BET Networks, a subsidiary of Viacom Inc. While there, she further utilized her vast range of experience as an editor, Post Producer, Post Supervisor, and ultimately, Senior Director of Post Production.

Most recently, joining The Africa Channel marks an even higher accomplishment for Sheila. Her new position as V.P. of Post Production and Operations is a perfect match. It will allow her to demonstrate her unique set of skills while also helping the company quickly grow into one of the nation’s premiere cable networks.