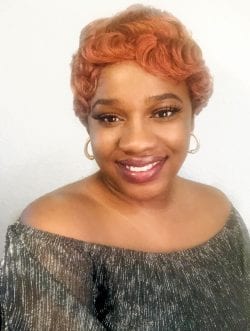 Nikkita Duke is the Media Coordinator and Writer’s Assistant for The Africa Channel and TAC Studios; providing support to the creative team in the development of new, scripted projects and providing support across all of TAC’s media platforms. She is very passionate about the representation of Africans in Film & TV and is excited to be a part of the TAC family.

Nikkita is a multiple award-winning Nigerian writer with a Law Degree from the University Of Buckingham (UK) and an MFA in Screen/Stage Writing from Northwestern University (USA). In 2016, her debut play, ‘Affiong’s First Novel’ won in a national contest in Nigeria and she’s been on a roll since. Her writing has been acclaimed internationally across continents from Africa to Europe to North America through writing competitions such as Little Wonder Short Radio Play Competition, Desi Writer’s Lounge Short Story Competition, Wild Claw Theatre’s Deathscribe Festival, and the list goes on etc. Her recent play, ‘Fatty Bum Bum’, premiered in Chicago this year at Fehinty African Theatre Ensemble (F.A.T.E.) as part of their 2020 residency programme. Currently, her grant winning, co-written TV pilot ‘U.S. Aliens’ is streaming on the esteemed TV platform, Open Television.

She is a proud member of The Dramatists Guild of America and her works have been read at The Goodman Theatre, Evanston Literary Festival, Chicago Dramatists, F.A.T.E., Crowd Theatre and NU Wirtz Centre. She’s been highly praised in popular screenwriting competitions including the Austin Film Festival, StoryPros International Screenplay Contest and Coverfly’s annual 2019 and 2020 Red List.